Naysayer is one who denies, refuses, opposes, or is skeptical or cynical about something!

There is an abundance of everything in this world including the naysayers! I don’t think we are born naysayers, it is the characteristic that we develop over a period. Like all other things, this human trait gets developed over a period due to circumstances in which we grow, people we have come across, maybe ones education. But when I think about naysayers that we see sometimes, it is really difficult to judge why one becomes a naysayer. One may be opposed to an idea, or thought process but one cannot be opposed anything new, it can be a new thought or a new technology!

These thoughts came my mind while I was reading about Bullet Train project. Why does India need a bullet train? What is wrong with today’s trains? They take you from place to place, sometimes on time with some comfort. Why change the status quo? To me bullet train is not a train, it’s a concept! I am advisor to a Japanese conglomerate in India. One customer of ours wanted to visit the plants in Japan. He wrote an e mail asking what is buffer time he should keep to catch a flight from place B. He was to travel from place A to B by bullet train. He got a reply from Japan, “What buffer time are you asking about?” Our friend was not sure if the train would reach in time for the flight. When he mentioned this, reply from Japan was, “No buffer time needed! Shinkansen never gets late! Only if there is major earthquake it can get late!”  When we have bullet train in India, I am quite sure part of a system in India will reach international level! Between Mumbai and Ahmedabad it is going to stop at 7/8 stations and will improve systems in those areas!

We have all seen this, look at Metros all over India. Very rarely we see Metro trains getting late, platforms being dirty and so on. This is observed all over India. Who uses Metros? Everybody! Why this has happened? It is said that a place is modern when rich use the public transport! We as a society are open to these changes, but our naysayers don’t want them. Sometimes I feel that naysayers are worse than the politicians. They do not want any modernity or a change. Kolakata metro is more than 20 years old but still remains spik and span! 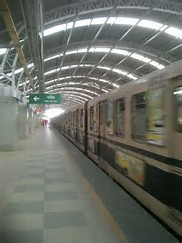 It is not about modern technology, it is about modern thought process. Modern methods that new technology can usher. When Mumbai Pune expressway was being planned the naysayers were of course dead against it! What happens after 20 years! We cannot imagine life without the expressway. Modern Facilities, infrastructures not only involve technology but a new way of thinking. In many countries train and bus systems are so well connected that they have a single ticket which can be used across the systems. New way of thinking comes up with new solutions. Indian railways is in the process of establishing a diesel engine plant in Bihar which is expected to go live in a year or so. But world over, the thought process is shifting from Diesel to Electric! In today’s papers, there is a news item that discussion is going on with the Partners GE about trying to find out ways of discontinuing this project. Govt maybe forced to pay more than US $ 2/ billions but in the long run it is nothing but benefits! Seeds of this discussion are already sown! Naysayers will of course say, “Oh, we are wasting money!”  Govt has recently scrapped 11 power projects based on coal and have decided to go ahead with Nuclear plants! This is again having the same reason as that of diesel engine plant! These two are examples of how serious now India is about environment!

Recently we travelled from Zurich to Frankfurt by train. Tickets were bought a couple of months in advance. When we went to Zurich and checked, I was a given a route paper saying that some track work required emergency repairs hence instead of direct journey there was a change in route. After one hour we changed the train, then we reached a very small station by another train, where there were no escalators etc. We were worried as our bags were heavy. But they had made arrangements for senior citizens; our bags were carried free of charge by porters to the other side of the station and put on a bus. The bus took us to another station about 15 kms away. At that station, we were put on a train to Frankfurt! Had there been naysayers in the railway system, they would have told us, Sorry! This is your refund! Have a great trip! What I could have done if I was given refund! Nothing and scramble for a way to go to Frankfurt! But it is positive thought process, because of which, we reached Frankfurt, only about ½ hour late!

How naysayers were against Maruti? They wanted people to continue using Ambassador and Fiat! Rajeev Gandhi introduced the idea of computerization, Manmohan Singh opened the economy in 1992! How much resistance was there! Our naysayers wanted to keep on following socialistic model where everyone remains poor! Even after their Citadel Soviet Russia had failed!

What is the profile of a naysayer; they are generally good speakers, are against any sort of development, have lawyers in the group, an engineer is thrown in between for technical arguments, and are generally know all. What is their agenda? NGO’s preferably foreign funded, are in their gambit, with foreign trips thrown in for lucky few! Their favorite subject also include housing encroachment on hills and tree felling! If half the hills are encroached by illegal shanties it is fine but someone tries to build something legal! Heavens will fall. Good old SFO is a city on hills and there many such cities world over.

In the city of Pune where I live in India, the usual traffic issues are there. For last 15/20 years government is hoping to build a road on the hills which may take care of bottle necks! Court cases started and it was ruled that, against each tree brought down, ten new trees should be planted. Government agreed to plant 50 in place of ten. Effect, one more court case against with another issue! What is the solution for this?

In democracy these things keep on happening. Patience is what is needed! I am not arguing that there should be no opposition; in fact different views always bring out the best possible solutions, most of the times. But opposition for the sake opposition is not the way forward. Years ago, India’s well known industrial doyen Shantanurao Kirloskar had said, ” Are trees for us or are we there for trees?” Hope our society will carry forward his wisdom and make this world and especially our city Pune, a better and modern place to live!

5 thoughts on “Naysayers or anti dev!”

This site uses Akismet to reduce spam. Learn how your comment data is processed.