Every society has its way of handling age and old people. What does it depend on? Relationships, money, closeness in the family, decide many aspects in life. Of course age is not the only factor, along with age comes the factor of health! If these two combine badly, the situation becomes dicey! In the current scenario where migration is the name of the game, things can be even more difficult; it is not migration to another country but it can be migration to a city from village or to another city, for work! Old are of course left behind!

My observation is that in western society, health permitting, senior citizens do a lot of things independently, without giving too much thought about age. This is probably because many generations have had a large number of senior citizens and are used to handle their own things, financially and otherwise!

In the generation of my grandparents, there was hardly any migration and most of the family continued to live together, many a times in the same house. Household requirements and individual requirements were very low and people survived with low incomes. At a later stage in my grand parents case, I think my father and uncles used to give additional support to them. It was always discussed in those days and even today, that people from that generation were really strong! They had to be! During young age of my grandparents, the life expectancy was so low, that those who were really strong, survived. Large number of people would die of influenza, plague and so on. There were no modern medicines or diagnostics. You catch the dreaded illness and you are gone!

But in today’s times, with Modern medicines, general improved health awareness, you see a lot of senior citizens around, with reasonably good health and in some cases wealth too! That’s a great combination if used properly. You have everything and diminished family responsibilities. So why not use the situation fruitfully? This is right time to start using ones bucket list! It could be books, travel, watching sports events, music events or whatever you have not been able to do in younger age.

In India we consider the age around 70 as old. Old enough to be reading Scriptures, living a contented life, interacting with grandchildren if they are around, maybe go to Mandirs and so on, in short doing nothing! This thought process is changing albeit slowly. Many of my friends in this age group have  become globe trotters, travelling with spouses and certain cases alone. In Western countries thought process about old age is  pretty different, the oldies are quite independent. We as a society should try and emulate good aspects of western thought process.

In last two years on different excursions we met a lady who was 99, travelling alone! Recently we met a 87 year old person again travelling alone. He has travelled to 99 nations in the world. Mind you, the examples I am giving here are all westerners. We have seen people who needed wheel chairs, one young man needed 100% Oxygen support. Yes, in foreign countries the facilities for physically challenged people are superb. That helps but it is the will to do it, will to travel, to explore through the physical challenge. Our group in both cases was predominantly of westerners!

In India our thought process is not very open to such thinking because for the first time, in our history, a large number of fitter & willing senior citizens are around. There is no history of independent senior citizens wandering about. We met an Indian couple, in early fifties, from Mumbai, at Matterhorn in Switzerland; they were kind enough to help us with some photos. While parting, the gentleman made a remark, “Sir, it is creditable that you are doing this journey at your age!” He had a valid point, not many Indians of our age travel internationally in mountains, independently. In the group in which we travelled, we were in middle range of the age group, many were 75 plus!

In general we take our age very seriously and think in terms of “Vanaprasthashrama” (fourth and final stage of life cycle)! Of course we have to be careful that when we travel we do not have any health issues! When we were travelling my wife Jaya had a minor foot injury. Our tour manager suggested, in good faith, that we should avoid mountains so that there is no mishap. But we were careful, reasonably confident ( of course not over confident) and did most of the things that were possible on the tour. We enjoyed the ride on the open deck of double decker cable car at Stanserhorn in Switzerland! Was the weather cold! 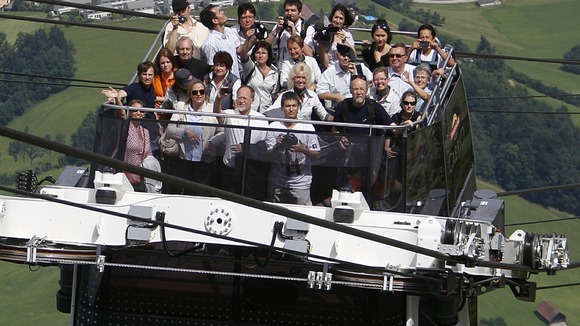 Another thing that happens with the age is that we become a little inflexible with our eating habits. But we always followed the dictum ” Be like Romans when in Rome”! So we did have Pizzas and Pastas and Salads when we were Italy and enjoyed them. Of course “Kartoffelsalat” while we were in Germany! Did we have lovely wines when were in wine country? Of course we did!

What we can do post retirement is dependent on our mind set and openness to try new untried things. Don’t forget that many westerners do come to India where systems, food, weather are quite different for them. They can do it because of the flexibility that they show. You must be wondering why I am giving examples of western world. This is just to explain how differently old age is treated by westerners and what are the joys of this different treatment.

While walking around in Lucern, we had 76 years old Jones from Montreal for company. We saw one Indian restaurant and she said, ” Since you and Jaya are with me, I would like to try Indian food!” We went there and enjoyed the really pleasant food, even by our standards! Only thing I did not manage is to make Jones eat raw onion, the way we eat it! I had also offered to show her how we eat with our fingers but at her request we passed it too! I am sure we also will become more adventurous and try different things! Happy globe trotting folks!

4 thoughts on “Age is just a number!”