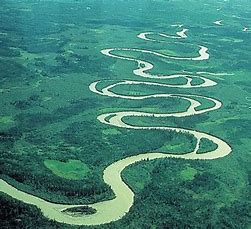 Meandering means following a winding course. This adjective is used for rivers. I saw some beautiful pictures of meandering rivers, on the net and felt like sharing with you! The river water just takes its course following the path of least resistance. Today my thoughts are meandering like the river and jump from one thought to another, just meandering along. In my city Pune, we have two rivers called Mutha and Mula. Their confluence is within the city. Mutha river has a path which hardly meanders, in fact, the river hardly has any water around the year. I am generous in this description. In any year, there are only 3 to 4 days when it can be called a river otherwise it is a stream! This is during monsoons when the upstream dams get full!

Yesterday my day started with a phone call from my friend Shrikant who is holidaying in Spain and Portugal. A rumour had reached him that a dam upstream of the river Mutha had broken and water was flowing above one of the bridges. Thanks to social media! I told him that there was a breach in the canal which draws water from the dam. The breach had caused a bit of flooding in the shanties along the canal, causing damage to homes of many families. As the water kept on coming on an extremely busy major road, there was a traffic jam in large part of the city. In the social media, the breach in canal got converted into a dam breakage!

Another friend who is currently in the US, sent me a message that I have become old, after reading my blog “What really is Romance?” I sent him 🤣🤣 as a reply! Dilip and I were classmates and both are around 70. I was wondering how I suddenly became old with one blog? My definition of romance was being together, sharing everything with each other, face life’s tough situations with a smile, together. Just a touch of hand and caress is romance. These are practicalities of life and has nothing to with age Dilip! Personally, I feel that I am around 45, age-wise, when I am in the gym I feel as if I am 55! Never in my life yet I have felt my real age around 70. Five years back I underwent cancer treatment. My health was down for about six months but even during the treatment my zest for the life never went down.

Our Supreme Court has taken five major decision a short span of last ten days. The interesting part is that 3 of them involved something related to sex. First one was about the gays. Now gays can openly move around in the society, maybe with their heads high. But I always used to wonder what is normal? A man and woman have liking for each other, have sex and make babies. As against that two men or women have liking for each other, have sex and obviously can’t make babies. What is abnormal in that? What was illegal in that? Why their heads had to be down? The gays are made such by nature. Do we mean to say that in “normal” people there are no freaks, there are no perverts, there is no rapist? In fact, rapists are the worst normal persons who go and rape kids, they go and rape even old women of the age of 70 plus.

Next one is about adultery. Finally, the Victorian era seems to be coming to an end – the judgment on Section 497 is progressive in many ways. In the context of changing social realities of our times, especially the transforming gender equations. Justice Chandrachud has cited the violation of Articles 14 and 21, saying that Section 49 perpetuates the subordinate status of women, denies them dignity and sexual autonomy, and is based on gender stereotypes. Previous law said that in the case of adultery if a man had consensual sex with a woman without permission from her husband, he could be arrested. The judgement has removed the criminality from the law. It is allowing women sexual autonomy! We are moving with times!

The latest one is about Sabarimala Devasthanam. They did not permit ladies between the age of 10 and 50 to pay their obeisance at the Devasthanam. They declared that women in this age group have their menstrual cycles active hence they are impure! Hence, they should not visit! Men who had taken this decision seem to forget that they came into this world because their mother had an active menstrual cycle and had sex with someone. They are the result of these two so-called impure acts! This is the tact used by men in patriarchal society to control things the way they wanted it. The court has said that in the democratic nation, rights of individuals are above the so-called traditions which have formed in a society and the thought process, which is totally irrelevant today. Some years back there was an incident. There was a case of theft at Sabarimala and 35-year DCP came to investigate. To the horror of the priests, the officer was a lady! Of course, she went inside and did her job!

Then there was the famous case of Babri Masjid. Supreme Court has given a decision that the case has nothing to do with religion and should be treated as a civil suit. According to the verdict, it is simply a land dispute case and will be decided based on the evidence available.

The last case is about the so-called intellectuals arrested by Pune police. A big noise was made by intellectuals about freedom of speech and freedom of expression. They claimed that it is a politically motivated case and should be summarily dismissed. Supreme Court has said that there is evidence to prove that these intellectuals were connected with a disbanded Maoist organization who have various plans, including bringing down the Indian Government by using force! What is it with these intellectuals? They do not say a word when Maoists kill people, last week two MLA’s in Telangana were murdered. Sometimes back 71 security forces were killed in an IED attack. Not a word of protest. These people have been praising terrorists as if they are freedom fighters fighting for India. Under the garb of freedom of speech, freedom of expression, these folks and their followers make statements which an enemy would generally make. When terrorists are killed, these guys write to the Human Rights Commission. But when security forces are brutally kidnapped and murdered, they are away on a holiday to cold climes! They are strong followers of communism at its worse, though all over the world communism has died.

Ignorance is bliss they say but is not treating your medical issues on time the right thing to do? Heard this one from a neurologist. The patient was diagnosed for MS, multiple sclerosis. This condition is tough on your body. The doctor further said that this has been going on for five years! Why do people delay going to doctors? The person accompanying the patient mentioned that he also suffered from diabetes, which currently was well controlled. Only thing is that the he needs dialysis twice a week, side effect of “controlled diabetes!” Amen!

On a lighter note, thank Mr Trump for starting a trade war with China. Mercedes Benz is now exporting their cars to the USA, from India instead of China! So long….