Among the political upheavals, hyperbole things are changing in India, slowly but surely. There was a political slogan, “India Shining,” sometime back. But India is silently shining. The surprising part is that the change is happening on the Engineering side of life. The engineering feats are not sexy like IT, where smart men and ladies market their achievements.

I read a couple of news items today. I found them very interesting for a different reason. One of the articles was about railways, and the other was about DRDO.

I will talk about the railways one first. When we speak of railways, we visualise historical systems, dirty platforms, and bogeys. In general, we get to remember inefficiency everywhere. But this article shares details about how a 20-year-old problem was resolved by Railway Engineering arm. The problem was about LHB coaches which were put into service; these were imported from Germany. There was a problem of coaches shaking, giving jolts while braking or at a higher speed. Railway team found a solution locally. There were about five thousand coaches involved. They replaced the Center Buffer Couplers with new design couplers. They also found that the usual braking method also caused these jolts. Hence they asked the drivers to use regenerative/dynamic braking system when speeds were above 30 Km/hr. With a combination of these two, jumping teacups and jolts have become history. There were 5000 such coaches, but with proper project management, the work on all of them was completed in two years. These stories don’t come out with fancy celebrations; these projects were done as part of routine practice. Great story to make everyone proud.

The news above is another silent development of a highly complex military requirement of anti-tank missiles. Initially, the order was placed with Israel, who had a fierce competition with the US. This order was placed in 2014 for 351 launching systems and 8000 plus missiles worth US $ 500/ millions. Indian organisation DRDO (Defense Research and Development Organisation) was also in the process of developing the missiles locally. After successful second stage testing at Ahmednagar, the government decided to cancel the contract with Israel and go ahead with DRDO under Make In India initiative. These weapons are highly sophisticated and use infrared technology which has been proven during testing in high–temperature regions of Rajasthan deserts. No fanfare, the sheer hard work is the key to such success stories. Again this is the story of excellent project management where DRDO will deliver all the systems by 2021 as per requirements of the army! Kudos to DRDO.

At the end of the second world war, Japan and Germany had lost, and many of their factories and cities were destroyed. All the treaties that were signed ensured that they would not resurrect rapidly. But somehow these nations rose literally from ashes like the Phoenix bird! All this was achieved due to the dedication, will power to excel and love for the nation.

India, as we know today, became one nation for the first time at the time of independence. With the diversity of people, religions, languages, cultures, it was like Europe or much more complicated. Getting people together itself has been the greatest achievement of the last century, though we do not realise this. India has another significant problem. Our diverse culture has been very mature and has an old history of thousands of years. So, specific thoughts and beliefs are ingrained very firmly in our minds. We take time to change. Added to this was the large population. That India has survived and prospered is a miracle by itself.

Slowly, we have started to learn to keep the diversity at home and now work together with professional pride as a single proud nation. Reading the above stories gives great hope to me about our great nation and people.

The viaduct of Pune Metro!

There are many such stories which are known to us, and we have started taking things for granted. Metro railway is an institution built single–handedly by the doyen of this technology E Sridharan. He was also instrumental in developing the Konkan railway system. The system was one of the most stringent projects to build because of the tricky mountainous terrain. What Sridharan did was a technological marvel, management marvel. All the projects handled by him were always completed on time. 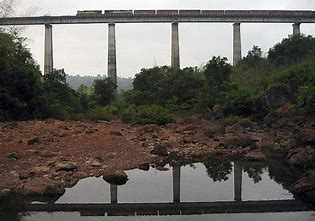 My classmate Shashikant Limaye was the chief engineer for bridges on the Konkan Railway project. Shown above is the bridge designed by him on the river Panval (Yes it is supposedly near my native place Panval, where I have never been!). This bridge is 80 meters high from the ground level. It is considered a significant technical achievement in the project. How do people like Sridharan achieve such things? Looking into the smallest of the details has ensured everything works like clockwork on these projects. There is an exciting story about Sridharan. As the Metro lines started becoming operational in Delhi, he would visit different sectors every day to begin his work. Where he would go was not known to anyone. As he entered the station, he would bend and check if there was dust on staircases and escalators by wiping with his hand. What was the result of this dedication? Delhi, Jaipur, Kochi, Bangalore, Chennai, Mumbai, Nagpur, Pune, Hyderabad, Lucknow are all having Metro lines or are in the process of installation. All projects have always been completed on time.

These projects have proven that in India, we can do world–class technical work and have excellent project management abilities. In the example of bogeys, do not forget that these bogeys were not in one place but spread all over India. The work was completed without hampering the regular services.

We have been doing great things in Technology. ISRO has already proven that it is India’s showcase world–class organisation. It competes and beats others from the world in quality, performance and equally importantly, costs!

On the business side Reliance has done a fantastic job of creating world-class large business; they have proven the same again in their Jio venture too!

But somehow we are not able to go up the value chain in other areas where we can do it. I am talking about the IT industry. They started doing well in ’90 s of the last century with Y2K! They started making big money and started getting large service contracts. Such contracts led to making even more money. In 20 years, these companies became very large, and have so much money that they did not know what to do with that money. Recently they started buying back their own shares from the market. The buyback indicated that they had no plans for developing new skills and gaining expertise in more modern areas. They have still not shown the willingness to go up the value chain. They have the people, the money but lack the will! I sincerely hope that these companies invest some money, human resources, and efforts in creating world-class products! Don’t just become Billionaires; become proud owners of great products!

This site uses Akismet to reduce spam. Learn how your comment data is processed.