Recent political saga brings questions to my mind! Is this typical human nature? Is everybody so power–hungry? Where do voters like you and me remain relevant? Many voters had voted for the alliance between BJP and Shivsena, but they fought about the chief minister’s post and split. Shivasena joined the opponents, and it has formed a government in alliance with the “secular” former opponents the Congress party. Shivasena is a strong proponent of Hindutva principle, and Congress has always been a “secular” party. Secular is defined as not connected with religious or spiritual matters.

In between, Ajit Pawar of NCP “joined” with BJP. Fadnavis and Ajit Pawar took oath as Chief Minister and Dy Chief Minister. That was another episode from the saga. The government formed lasted only for a couple of days, thanks to the Supreme Court.

All these happenings appear to be a stolen script from the Epic of Mahabharata. We have two Epics, Ramayana and Mahabharata. Ramayana is the epic which follows utopian text and Mahabharata has the real–life script. The last three days story of Fadnavis taking the oath was a shame on the democracy. One felt like shutting the eyes or not putting the TV ON. One felt like not even reading the newspapers. It was a shameless behaviour. It can be compared with the disrobing of Draupadi in public by Dushasana. Her modesty was saved by Lord Krishna by supplying an endless supply of sarees! Similarly, the Supreme court’s order to prove the required strength of MLA’s within 24 hours saved disrobing of democracy in Maharashtra. 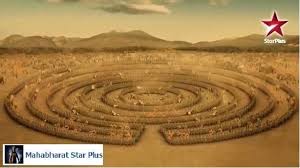 Ajit Pawar openly went against his leader Sharad Pawar and tried to break the Chakravyuha set up by his uncle Sharad Pawar. Ajit Pawar like Abhimanyu thought he had the knowledge to break through the vyuha. Like Abhimanyu had learnt half knowledge about breaking of chakravyuha while he was in his mother’s womb, Ajit dada thought that he had learnt all the tricks from his guru and uncle, Sharad Pawar. But he did not know that he had only half the required knowledge.

In Ramayana, when Lord Rama went for 14 years of vanvas, his brother did not take a quick jump on the throne. Bharat’s mother Kaikeyi had played her cards well to send Rama to vanvas. But Bharat was loyal to his brother, and for all these 14 years he kept Rama’s paduka’s (footwear) on the throne as a gesture to show his respect to Rama. He looked after the administration under the tutelage of Rama’s paduka’s and was representing Rama. BJP and Shivsena fought the election under the leadership of BJP. Once the results were out, they took the role exactly reverse of Bharata. By breaking the partnership with BJP, Shivasena has sent BJP on five-year-long vanvas! While doing so, they have accepted the terms of their “opposition” of not making Thackrey’s son the Chief Minister! If they had shown the same maturity in discussions with BJP, they would not have broken their pre-poll alliance!

In all this saga, where does the common man like you and me stand? People voted to the BJP-Shivsena pre-poll alliance. People voted the candidate in their area irrespective of his party. The vote was for the alliance. They had faith in the coalition and not on individual party. They now feel cheated.

The show was the politics at it’s best or the worst! One crucial point comes to mind. These parties run on donations given to them by their cadre and some other organisations. The money is given to run the affairs of the party. But they have shown so much faith in their MLA’s that these guys were put “under house arrest,” in five–star hotels. These were about 150 people. They were in hotels for about ten days. If we consider an average room rate of Rs. ten thousand, they spent Rs. 1.5/ crores minimum. The first thing is why five–star hotels are needed to keep these people “under arrest”? The second thing is why these MLA’s are required to be kept under “arrest”? If this is the faith the parties have in their MLA’s, how will they ensure that in future MLA’s will not rebel? Once the government is formed, there will be dissatisfied souls. BJP sitting on opposition benches is not going to keep quiet. There are 26 independent MLA’s, so they probably need additional 15/20 MLA’s. In Karnataka, BJP showed patience and got a chance to form a government after a couple of years! Poaching of MLA’s is nothing new, but now there are good laws like anti-defection laws in place! Maharashtra saga may show the way for creating some good laws against breaking alliance after elections have been won with pre-poll agreement!

Politics world over is the same. It is the methods of handling the situations that vary. Brexit is a classic case of the political mess in Britain. Young people, who are affected the most by Brexit did not take part seriously in the referendum. When the results were out, Britain had opted for going out of the EU (European Union). There was enough time for Britain to exit smoothly, but the successive governments handled things poorly. The result was that a Prime Minister had to resign. Second Prime Minister who thought that he could sail through has been stalled at every stage. He was finally left with no option but to call for an early election. What the election results will do, is anybody’s guess. I am sure there must have been many internal offers to switch votes for the MP’s. But in Britain, they don’t “arrest” their MP’s against the fear of revolt. But the result has been the same, confusion.

Both democracy and dictatorship have their pros and cons. But democracy has more pros than cons. People prefer to live in political uncertainty rather than living under the fear of tyranny. Look at what is happening in Hongkong. China is trying very hard to push her ways and take control of Hongkong, but the people of Hongkong are fighting tooth and nail against the changes China is pushing!

Besides election troubles and chaos, governments world over are experts in creating a mess. Currently, there is a big story going on in the Parliament in Ireland. A huge printer worth 1.3 million pounds was ordered. When the printer arrived in the parliament house, they realised that it could not be taken inside the building because of the size. The printer was moved to a storage godown at the cost of two thousand pounds a month for almost one year. The location was corrected to accommodate the printer that cost another twenty thousand pounds. Finally, the printer was installed and got ready to print about two months back. Not a single paper has been printed, yet!

All activities in a society reflect on some other action. We have a difference of opinion at home, in the place of work. We bicker with friends and relatives.  So why bicker about what happened in Mumbai. It has been happening since the days of Mahabharata! We rarely see things happening in the Ramayana way. Yudhisthir had to give that famous reply “अश्वत्थामा हतो नरो वा कुञ्जरो वा” to deceive Dronacharaya. When Dronacharya was told that Ashwathama died, he asked Yudhisthir as Yudhisthir always spoke the truth. But “अश्वत्थामा हतो नरो वा कुञ्जरो वा” meant that he was not sure if it was the human or the elephant of the same name! In short, he also discretely lied! But we have only one in a million  Yudhisthirs, so what more can we expect from our society and from our politicians?