Lokmanya Tilak had said, “Swarajya is my birthright, and I shall have it”! Swarajya is self-government. Tilak had said this when the Britishers were ruling India. As a society, we take certain sayings by great men like Tilak seriously, especially when it suits us. This morning I went for my morning walk and enjoyed the lovely weather. Near our home there is an excellent and broad street with trees; most of the establishments on the street are commercial. Hence at 5.30 in the morning, it is an ideal road for a walk. Suddenly, I saw that there was a cluster of 50 to 70 motorcycles and about a hundred plus young men. I had seen them yesterday too, but I thought maybe they are meeting there to start a walk or run a race!

But today I saw a truck, and there was lighting on the footpath that could be seen from a distance. I thought that there could be some film shooting taking place. But when I went near, I saw that there were heaps of milk pouches manufactured by six or eight different companies. Total milk lying on footpath must have been about five hundred litres. At Rs.40/ litre its cost would be Rs. Twenty thousand, and per month billing would be Rs. Six lacs or 0.6/ million and per year turnover of Rs. 7.2/ million. Not bad! But the gentleman who was running the show was using a public place to run a biggish business. At that time of the day, no authorities would be awake to check this misuse! It was the business man’s birthright as an Indian citizen.

One aside in this story. After the milk was distributed, all the used plastic bags  employed as bulk carriers were strewn on the road. After all, it is the job of the corporation to clean the streets. As against we have seen that the Japanese are assigned separate sections to watch world cup football matches. After the game, the Japanese clean their whole stand of kachra before departing.

Near my home, on the main street, an ice cream vendor occupies about 250 square foot of road and footpath area to run his ice cream parlour, chairs and all for customers. He is there between 6 pm to 11 pm, on a crowded road. He has six to eight ice cream parlours all over Pune. This location must have been his first “parlour” established on public property as he lives nearby (he must have put it up initially as a small-time businessman). Though his business has grown large, he continues with his birthright of using public property. The anti-encroachment team of the corporation are, of course, not “aware” of the misuse.

The Indian government has made it mandatory for people to build toilets inside homes as a prerequisite to stand for any election. People have taken it seriously and built the toilets. But some manly, macho people still use their fields for the morning ablutions. They feel that it is stupid to use a toilet for the purpose. Birthright? 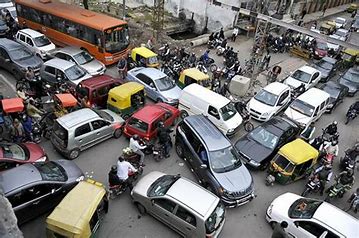 I started thinking of many such birthrights that we assume are granted to us by the constitution.

What is so unique that we behave this way? What could be the reasons? DNA? I don’t care attitude? Fundamental lack of sense of discipline? What is it? Lack of fear of the authorities?

We seem to be proud of our exotic chaos, we are proud of all the dirt spread around us. And that’s why foreigners flock to see us. They have never seen such confusion anywhere in the world, so they come here to shoot movies showing the worst of us and go on to bag Oscars for depicting Indian at its ‘best’.

And then, we blame our politicians for how corrupt they are. When we are so undisciplined, so selfish (ignoring public property to suit personal comfort, needs a term worse than selfish), then how can we expect them to be ideal? I think we deserve the corruption in bureaucracy and politics we are facing today. Our politicians are as selfish and undisciplined as we are. We then even blame our youth for brain-drain, I think there is nothing wrong in escaping this mass indiscipline if one has better options abroad.

Friends, any suggestions? Do you know specific reasons why we behave the way we do? Let us discuss it, no point in ignoring any further!

I landed in Seattle very smoothly and thought wow, what a smooth landing! I went to pick the trolley for my bags and found that most of the people were lugging their bags. I thought people were saving their five dollars! I came out and was waiting as my son got stuck in in traffic. While waiting I thought let’s have a coke. I went the counter, I had a lot of change with me, from my previous trips. I gave the girl all loose coins. She counted those twice and had difficulty in counting. I told her don’t worry the amount is right. Finally I could drink my coke.

My son arrived he said there was a big rush at the toll collection and in the parking area. Luckily he had a stash of coins in his glove compartment. He said that I must be having cash? I was wondering what happened to him? Usually he takes away my wallet when I reach the US and returns it when I am being dropped back at the airport.

Again there was a big queue, arguments, somehow people were managing to pay the toll in cash. I thought probably something wrong with their electronic collection system. Reached home, freshened up a bit then I suggested to my son that we go out for dinner at my favourite Italian place. It was almost empty and I was wondering how this place is not crowded on a summer evening. We had our leisurely dinner, followed my practice back home, put the cash and paid; took a small drive in the mountainous area and came home. (Later on I wondered why my son did not object to my paying for the meal)

I put the TV on and saw President Trump just starting his address to the nation. America had decided to monetize itself as all the electronic transfer systems were under tremendous strain. With too many small transactions, internet was getting clogged. Hence the US government had taken a decision that all transaction below US dollars 100/ will be done in cash. Now I realized the meaning of things that I could understand on arrival! My son had about US $ 22.53/ in his home. These he would need for at least two days of travel toll. He was really not sure how long he may have to work from home as getting cash from ATM’s and bank had become a nightmare.. There were big lines all over US at ATM’s and banks. Majority of notes coming out from ATM’s were US $100/ as small denomination notes were in short supply. People had no use for large denomination notes as such. Mr. Trump said US Government had taken this action because a secret report showed that younger American generation could not count, they did not know number tables and they also could not do small mathematical calculations in mind; that is the reason they have started centers all over US to teach young generation to count notes and coins, quickly. Retired bank people, teachers and whoever was willing to help were drafted to teach people to count. At toll booths a lot big boxes were required to collect the small denomination notes and coins. People had difficulty in recognizing notes as many youngsters had hardly ever seen them. Calls were frantically made to Indian government to send experts to share Indian people’s knowledge of stashing cash.  Indian government had a ready list of such people; they were given visas to travel to US, no questions asked!! Large number of small notes were getting printed in the US but CIA was negotiating with counterfeit dollar printers world over, who could offer their presses to print genuine currency. Narcotics gang were also checked but they all had large stacks of high denominations notes. They were offered 20% clean profit for exchanging small currency notes but to no effect.

I was wondering does 12 hrs of time difference make so much difference. Or was it cultural? Or was it in DNA? How the problems of two nations were diagonally opposite? I started to explain to my son the experience of demonetization that we had in India. I was quite animated and moved my hands to explain a point and thud! Something fell down. Oh, I just woke up with a start and my wife said we have just landed at Seattle. She said you were very animated in sleep. We got down and saw our son waiting for us. We embraced and he removed my wallet from my pocket as was normal practice and said “Dad, Welcome to US”!