Now the writer in me has started understanding the difference in going on a planned holiday on a tour and living at a destination for a reasonable period. Taking a tour is like going for a movie and then to go back to your routine. Whereas staying at a place is like reading a long novel. Enjoy it part by part. And keep on doing it for a much longer duration.

The leaves are changing the colours but not as fast as I have seen at other locations. In Montreal maybe only the Maple leaves change the colours, others only wither as winter arrives. Hopefully, within the next few weeks, I will come to know what happens.  I said this, and I saw some lovely colours today when we went out for lunch.

Public transport is one thing that I am enjoying; I don’t get that opportunity in back home. It feels nice to say hello or good morning to the bus driver while swiping the card. The response is also always a smile. Some of us may think that it is a bit mechanical, but it is anytime better than ignoring each other. Now my French vocabulary has reached the level of Merci and Bonjour! Priya shared one experience with me, which was shocking. Once while Priya was in a bus standing, a lady struggled to climb up with a walker. The driver did not start the bus as she was struggling and must have been hoping that someone will provide her with a seat. The driver even requested people to do so. But it took a few minutes for someone to decide to offer her a seat. Jaya and I are sometimes offered with the seats, but maybe we do not look old enough.

A couple of days back there was Environmental March which 50000 people attended. On that day, Montreal city contributed in a very innovative way. The public transport for all the people was free for the whole day, to encourage people to attend the march.

One thing I observed about the weather is when it is raining intermittently, the temperature may be higher, but it feels damp and cold. Five degrees cooler with Sunshine feels warmer even in the shade.

There is one interesting service offered. In our area, there was a power outage for about four hours due to some cable related issue. The affected zone was isolated, and the power was restored. It is now four days, but the fault is yet to be rectified. But that is not the end of the story. Electricity people have made some temporary arrangement with wiring and have provided power continuously to affected people for these four days using a truck-mounted generator.

Though I see at least one beggar at most Metro Stations (but never more- which is a surprise). 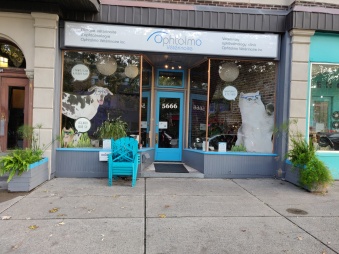 The developed countries have their own different systems and facilities for the pets. I see many shops catering to pets. I see many veterinary doctor’s clinics too! Probably many couples prefer to have Pets instead of children. These shops keep different clothing available for the pets. These include wedding dresses, clothes for winter, raincoats for use during rains and so on.

Another interesting thing found here is the number of flowers and flower beds, currently. People know that the flowers are going to last only for six or seven months, every year before winter takes over. But they follow this expensive hobby! 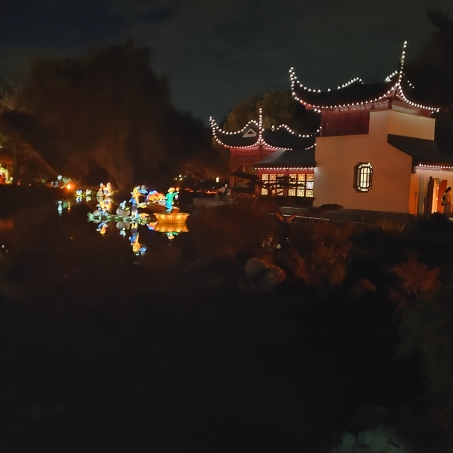 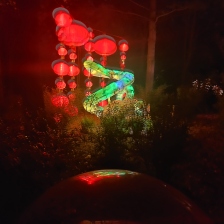 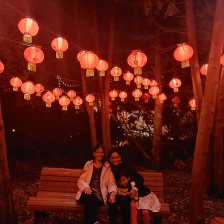 One fascinating place to visit is the festival of lights at the Botanical Garden, near the Olympic Stadium. Inspired by the ancient Chinese tradition, this event has been enchanting people since its creation. Glittering lanterns of various shapes illuminate the Chinese Garden and the eyes of thousands of visitors who come to enjoy the magical spectacle. The Japanese Garden leads you along a meditative illuminated path inspired by the seasons, and the First Nations Garden features an intense multimedia experience that lets you feel the beating heart of the Cycle of Life. One interesting thing; the path in the Japanese garden is quite dark, but they have made the displays with the help of mirrors, the trees appear as if they are full of fireflies! One more speciality was the Bonsai trees. One of them was as old as 160 years.  Montreal Olympic Stadium Tower in the background of light festival.

Even as late as 15 years many Indian food items were difficult to procure, including the raw material like dal etc. But it is a pleasant surprise that most of the things are available here in Montreal reasonably easily. One can imagine their availability in the Bay area in SFO and New Jersey!

It appears that the preparations for Durga Pooja, Garba in Navratri and Diwali are already on or are being discussed. I will feel happier when assimilation of festivals also takes place, and friends other than those of Indian Origin are invited to celebrate such festivals.

I hear of Indian people who have been living in Toronto and Montreal for more than forty years. In the initial phase of their lives, it must have been trying for them to live an Indian way of life. But with more and more people living in different parts of the world, I was not surprised to see a typical store in one of the malls selling Agarbattis! Business is the ultimate leveller in this world. I read somewhere recently, that Agarbattis worth Rs. 800/ crores were imported in India from China. When we were on the Alaska Cruise about three years back, there were at least forty different Indian food items available in the spread. These included Dal- Khichdi and Malvani Fish!

With more and more Indian professionals becoming financially more comfortable at a young age, they are going to travel more, and I won’t be surprised if Indian items become very popular like Indian Curry and Indian Restaurants in the UK! Add to this, the children of Indians born in foreign countries; so, this number is going to become very big as keeping touch with home base  has become more comfortable with video calling and internet calling.

By the way, we went out today to eat Pani-puri and Wada-Pav! But I had Wada-pav and Thali!  The joint is started by a French guy who got himself trained in Mumbai.The Chai was served the Indian cutting way. 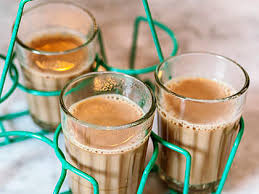 The day before yesterday, I had breakfast in a restaurant serving middle eastern food, on top of that it was vegan. There was some lovely omelette, another item which was like our Sanja and a dish made out of lentils with a nice bread! I had fun.

Another thing I saw on Montreal roads. Public charging of EV’s is now available. My little knowledge of driving cars for fifty-plus years tells me that fuel tank and the lid are on the opposite side of where the driver sits. But the Tesla I saw being charged on the road, had the charging on the same side as the driver side! Can anybody explain to me why this would be so? All other EV’s seen in Montreal followed the normal convention!