I read an article about a song and dance program held in Cipla Center of Palliative Care, in Pune. The article was written by the lady who was the main performer. She knew that this centre gives palliative care for Cancer probably terminal patients. The program was for the entertainment of these patients. She was apprehensive as she had never done this before. She was wondering how these patients will accept her program. The program was to create the joyous atmosphere in these patient’s lives. She reached the venue and the hall started filling up with patients. Some walking in, carrying their own drips, some coming in the wheelchairs. Then a few beds were brought in. The lady was awed by what was happening and she did not know what to expect. Patients were brought in to the arena on gurneys and transferred to their beds!

The program started and the rhythm picked up! Some of the patients started blowing whistles, as is the tradition in Tamasha songs. People started clapping and shouting. The peak of the show was when one of the lady patients, lying on an inclined bed started moving to the rhythm. She was very ill. She was wearing a Saree. In her bed, she did some sensuous movements using Pallu of her Saree! What courage? What attitude?

Here was a lady, very sick. Maybe terminally sick and I am sure she knew it! But she was not only enjoying the moment but her attitude must have given encouragement to other patients. It is such people who make this world a great place to be in! These people are the beacons of society. The lady did what was unthinkable though at the back of her mind she must have known that these were her last months on the earth. How do such people have the courage to look death in the face? Yamraj must have thought after tracking her activity, why not keep this lady on this earth for a longer time and make earth a better place! I am writing this based on the article written by the performer. I do not know anything about the lady but I feel like getting up and to go and give the lady a hug! Hats Off Mam!

We have read about historical accounts where people have reacted bravely knowing that their action would result in an imminent death for them. The battle of Sinhagad fort during Shivaji’s time is the classic case. Tanaji and his cousin Suryaji attacked at night and climbed the treacherous fort using ropes. In the battle, Tanaji died and Suryaji took over. The soldiers panicked and started to run back towards the ropes. Tanaji’s uncle Shelar mama cut the ropes. Soldiers had no option but to come back and fight. Marathas won that battle. Shelar mama took the action of cutting the ropes thereby he took a grave risk where his own life was also in danger. He knew that they could lose and that he would surely get killed. But he was not afraid of this eventuality. He took this decision knowing the grave risk to him. Such people make the armies that win the battles. Picture of Sinhgad Fort below.

There was the similar battle of Pavan Khind. Shivaji Maharaj was trapped on Panhala fort and decided to try and escape to Vishalgad. But his escape was found by the enemy quickly. They started hot pursuit to capture Shivaji. Baji Prabhu Deshpande suggested to Shivaji to move further and waited at Pavan Khind which was a narrow pass. He fought with a small army and fought the enemy till Shivaji reached Vishalgad. When Shivaji reached Vishalgad he ordered two gunshots to be fired as a signal of safe arrival, to Baji Prabhu. Baji Prabhu though was severely hurt fought valiantly till he heard the signal. His death was imminent but still, he volunteered to save Shivaji. Painting depicting Pavan Khind battle. 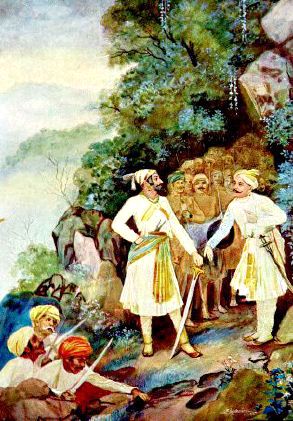 Next is one example which gives me goose pimples, even thinking about it! This is about a friend of mine Prakash. He is a happy guy but I never knew that he was made of steel! Rather his mind was made of steel, his body was not! He has been trekking and used to travel all over India. After completing one of his treks, he was returning to Delhi to fly back to Pune. After the episode, he remembered that there was some scratch mark on his right hand which started the episode. He ignored it as he thought that it was a scratch due to something pointed from a bush.

As he reached near Delhi, he started feeling very uneasy. Within a matter of hours, he realized that skin on his right-hand was looking different. It looked very harsh and gangrenous. His hand looked shocking to the naked eye. He reached Delhi and went straight to the airport and wanted to travel back to Pune. Airline staff correctly refused to take him on the flight. He spoke with home and within a short period of time things got organized. He immediately rushed to a major hospital where some family friends also arrived. Luckily the correct treatment in ICU was started immediately. His family travelled immediately to Delhi but I am sure that nobody was prepared to the saga that was to unravel!

He was diagnosed with Necrotizing Fasciitis (Flesh-Eating Bacteria)! One of the rarest things that can happen to humans. The death rate in such cases is as high as 30%. He was lucky to be in Delhi where excellent doctors and facilities were available. The link below gives details of this condition.

During the treatment, most of the flesh from his right arm, about 3 to 4 inches from shoulder, had to be removed and bones were totally exposed. Doctors could arrest the progress of the attack. What happened was simply horrible. A normal person would have been extremely nervous, could have gone into depression. But not our Pakya. He and his family took it in a very positive way. Just guess how much time it took for the arm to get to almost normal? About 4 years maybe more! His arm was rebuilt stage by stage with plastic surgeries. I am sure you will agree with me that Pakya is made of steel! I will just share one detail which will show Prakash’s grit and determination. During the final rebuilding phase of his hand, his right hand was stitched, yes stitched to the stomach for a couple of weeks so that proper skin grafting could take place!

What makes such people so strong? We read a lot of war stories where kids in their early 20’s show valour that will make any society proud! What gives them the inner strength? Since Prakash is a friend from college days, I know him quite well. But I never thought that he would have such a steely determination. This strait is only in a very few people and I consider it is my luck and honour that Pakya is my friend! Hats Off Buddy!